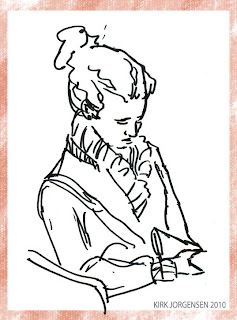 I took in my first full Ottawa International Animation Festival also known as OIAF. I had a great experience.
A few highlights included: The Friday night Lecture @ the Musuem of Civilization which was presented by animator Patrick Osborne from Disney who talked about the upcoming film "Tangled",(very cool) followed by screening Salon de refuse which included my friend and co worker Kyu Bum Lee's short film "Death Buy Lemonade" . Saturday we went to two workshops, and then to see the film the "Illusionist" which I really liked. The Sat night party @ the Hard Rock Cafe was great to see some old friends and meet some new ones.
Hopefully I will attend next year! & see you there.
Posted by Kirk Jorgensen at 7:10 PM

Glad to have you on the trip.
Gotta go again next year for sure.

Kirk Jorgensen
Storyboard Artist, 2d Digital/Traditional Animator. Feel free to drop me a line & Thanks for stopping By!