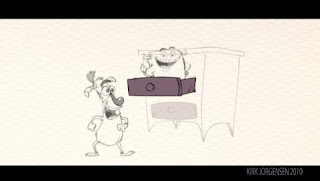 I've been poking at this "outlet" piece here and there for a couple of months now.... still a work in progress, It's a scene from season 2 of Mischief city, which I re-animated and extended. I liked the voice acting and thought it would be fun to see what I could do with it.
After doing 2, 11 second club entries, I wanted to do something that didn't have such a tight deadline I guess.

I wanted the look and feel of the piece to be a little "rougher" and more of an "organic".which was a much SLOWER process. I also wanted to try to animate it a little more full and give the animation itself texture contrasting the broader actions to some subtle movement throughout.

I figured I better post it, before it gets buried in the dust.

So just what exactly did Cube run off screen to go fetch as thee greatest toy in the whole world??? stay tuned...I'm gonna have to figure that one out.
Posted by Kirk Jorgensen at 9:47 PM

Looks great so far.
Can't wait to see it finished.

Kirk this is sweet man, you sound busy, keep up the great work, it's inspiring to see you doing so much.
-Trent

That looks great Kirk! Now if only you could play hockey as well as you animate......

Great to see your work again!

Kirk Jorgensen
Storyboard Artist, 2d Digital/Traditional Animator. Feel free to drop me a line & Thanks for stopping By!